Excursions with Arctic and Antarctic Museum 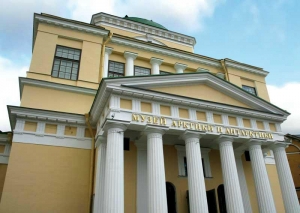 The silent white continent has always been attracting scientists and explorers. For a long time Russia and then the Soviet Union held the lead in the opening up and exploration of Polar Regions. In the Soviet period a special museum that was meant to cover this field of knowledge broadly was established in Leningrad. The museum was founded in 1930 as the department of the Arctic Institution and opened to public in January 1937. The basis of the collection was formed from the exhibits of Traveling polar exhibitions that regularly took place in Leningrad, Moscow and Arkhangelsk in 1923 — 1935. During World War II the museum was evacuated to Krasnoyarsk, and already in March 1950 the citizens of Leningrad could walk again about the halls of the favorite museum. At the end of the 50s soviet scientists launched the investigation of Antarctic. Soon afterwards the first exposition devoted to Antarctic was opened and the museum was renamed the Museum of Arctic and Antarctic. The museum is situated in the former building of the Nikolskaya Church, built in 1820 — 1838 to the design of architect A.I.Melnikov. The building was declared the architectural monument of the 19th century. Nowadays there are several permanent exhibitions in the museum: Nature of Arctic, Antarctic, Discovery and History of Exploration of Northern Sea Route, Economy and Culture of Northern Regions. The exhibition devoted to the nature of the Arctic, familiarizes with geography and natural resources of Polar Regions, tells about the unique flora and fauna of tundra and Northern seas. The typical forms of adaptation of arctic species to the rough life are demonstrated with concrete examples. The wonderful dioramas Tundra in Winter; Tundra in Summer; Shokalsky Glacier in Novaya Zemlia; Matochkin Shar Straight illustrate the life of the Arctic. The center of the museum exposition is a large relief model of the Northern hemisphere with the land, sea and geographical borders of the Arctic. The Discovery and History of Exploration of the Northern Sea Route Department presents the discovery, exploration and development of navigation since XI -XII centuries until present time across the North — East Passage or, as it is known in Russia, the Northern Sea Route. The pioneers of the Northern seas were Russian coast-dwellers who traveled back and forth along the Northern coasts of Eurasia. The fragments of the ancient sailing vessel (koach), clothes of Polar navigators, dating back to the 16 — 17 century, and other relics are on display. The expeditions headed by V. Bering, V. Chichagov, F. Wrangel, G. Sedov, V. Rusanov, G. Brusilov and others made an outstanding contribution to science and development of the North. The major part of the exposition is devoted to the so-called «Tchelyuskin epopee». The expedition vessel «Tchelyuskin» was caught in the ice, crashed and sank. The ship's crew and expedition team had to survive on drifting ice for 60 days and had to endure the most severe of weather conditions. They were finally rescued by the polar aircraft. Amongst the most interesting exhibits of the department are the original equipment of the Soviet drifting stations: cloth, furniture, scientific instruments, personal items used by the members of polar expeditions and even, an equipped mobile cabin of the drifting station «Severnyi Polyus -3». The exposition ends with the active model of aurora, visually demonstrating the unique natural phenomenon. The exposition of the Antarctic department familiarizes with the nature and geography of Southern Polar region and tells about the history of exploration of this mysterious continent. Russian navigators F. Bellinsghausen and M. Lazarev were the first to see the coast of the Antarctic Continent. In January 1820 two small sailing boats «Vostok» and «Mirnyi» pushed through the storms and fogs, drifting ice belt and chain of giant icebergs and reached the continent later called the Antarctic (opposite to the Arctic). The last exhibition is devoted to the economy and culture of the natives of the Northern Regions. The inclement climate and unique nature of the Arctic determined the way of life and occupation of the indigenous population. Hunting, fishing and deer-raising were the primary occupations of the Yakut, Nenet, Koryak, Evenk and Chukchi people for many centuries. In the 20th century rich resources of raw materials were discovered in the Arctic, mines and modern plants were built and now work there. Samples of national cloths, traditionally made of reindeer skin and fur colorfully decorated with beads, ivory carvings, works of applied art, as well as paintings and sculptures are on display.

The Helvetia Hotel & Suites is wonderfully located just a few steps from Nevsky Prospect, the main street of Saint

The Luxa Ligotel mini-hotel can offer its guests accommodation in 6 comfortable and spacious rooms, courteous and

The Allegro on Ligovsky Prospect mini-hotel is sityated in the center of St. Petersburg, not far from Nevsky Avenue

Atmosphera Marata 10 mini-hotel is located in the heart of St. Petersburg, not far from Nevsky Prospect, Moskovsky