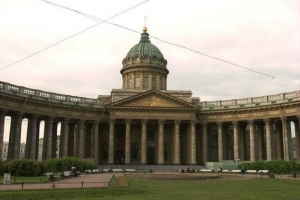 The solemn foundation of the Cathedral of Our Lady of Kazan took place on the 27th of August, 1801. The new cathedral replaced the wooden church that had been constructed in 1733-1737 by architect Zemtsov and treasured the miracle-working icon of Our Lady of Kazan. This icon was a family relic of the Romanovs and was thought to be the patroness of not only the ruling royal family but of all Russia. The construction of the cathedral that according to the wish of Paul I was to remind of the St. Peter's Cathedral and the Santa-Maria-Magiore in Rome at the same time, was entrusted to architect Voronikhin, who had been Count Stroganov's serf and later became the professor of the Academy of Fine Arts. The construction works took 10 years — respectively a short period for such a grand construction. It is interesting that the cathedral was built exceptionally of the home manufactured wares and only by local architects, thus from the very beginning the accent was made on patriotism. To construct the cathedral in such a short period of time thousands of workers and serves had to work round the clock in the most terrible conditions. The Cathedral of Our Lady of Kazan was planned in the shape of the Latin cross. Voronikhin had a difficult task to solve: in keeping with the church canons, the altar of the cathedral was to face eastwards, hence the main entrance and the facade faced westwards. Thus the main street of the city, Nevsky Prospect, was to front the side facade of the cathedral, and not the main one. Voronikhin solved the problem by supplying the cathedral with a grand semicircular colonnade facing onto Nevsky Prospect. The wings of the colonnade that form a square in front of the cathedral have monumental portals at the ends, simultaneously serving as passageways. Voronikhin intended to put up a similar colonnade facing south; however, the Patriotic War of 1812 broke out and interfered with his plans.  In 1811 citizens of Saint Petersburg admired the new cathedral that became the largest temple in the city of that time. The height of the cathedral was impressive 71,5 meters. Inside and outside the cathedral was adorned with unique columns made of large granite monolith weighing 30 tons each. The Patriotic War of 1812 became a crucial point in the history of the cathedral. The temple constructed to house the miracle-power icon of Lady of Kazan was turned into the treasury of the victory relics and became a sort of museum of Russian war glory. In 1813 in the Cathedral of Our Lady of Kazan field-marshal Kutuzov was buried and the memorial significance of the cathedral increased considerably. In 1837 in front of the cathedral the monuments to celebrated Field Marshals Mikhail Kutuzov and Barclay de Tolli, the heroes of the Napoleonic war, were placed. Designed by sculptor Orlovsky they fit the whole ensemble so splendidly that many citizens of Saint Petersburg still believe that they were included in the original project of Voronikhin. Soon after the Revolution of 1917 the Soviet Government took the Cathedral of Our Lady of Kazan from Russian Orthodox Church and adjusted the unique building to the Museum of the History of Religion and Atheism that was opened to the public in 1932. The date of the 4th of November, 1990 is considered to be the day of the cathedral's revival. Then for the first time after more than a 70-years break the divine service was held in the Cathedral of Our Lady of Kazan.

The Belvedere-Nevsky hotel is conveniently located in the historical center of St. Petersburg, near Nevsky Prospect