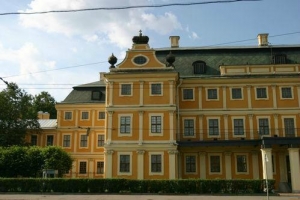 The Menshikov Palace is one of the first stone mansions in Saint Petersburg. After the glorious victory of Russian troops in Polatava battle on June 27, 1709 it became clear that Swedish army was about to lose the Northern War. It was obvious that the enemy troops would never attack the lands on the Gulf of Finland Coast, so the conditions were favorable enough for Saint Petersburg to grow. Peter I, the founder of the city, asserted that «the victory at Poltava put the perfect stone in Saint Petersburg basis». The construction of the Menshikov Palace was started in 1710 under supervision of architect D.-M. Fontana. Soon he left Saint Petersburg, and in three years German master J. Shadel took his place. The palace was put up in several stages. The famous restorer A. Gessen determined that at first the Menshikov Palace looked like a relatively small mansion that was lately enlarged by building two symmetrical wings that formed a garden in front of the palace. Along the palace walls an open gallery was constructed, so the construction looked like a single whole. The garden was decorated with numerous sculptures, nice fountains, grottos and greenhouses with exotic plants. The bank of the Neva River in front of the palace was equipped with a dock so the ships could land close to the Menshikov Palace gala entrance.The palace built for the associate of Peter I is a very immense construction. It combines elements of both Russian and Western European architecture. Some parts of the palace remind of Italian Renaissance palazzo, and the vaults decoration of the Menshikov Palace is typical for Russian architectonics. The visitors of the palace can see original interiors, such as the hall, the gala staircase, the Dutch-style rooms with tiles covering the walls and the ceilings. The interiors of the palace are decorated with gold, silver, marble, precious kinds of wood, paintings, moldings, Antique Italian sculptures, large Venetian mirrors, crystal chandeliers, Chinese silk wallpaper, and tapestries. The palace features rich collections of applied art objects, sculpture, coins and canvases by Russian and European artists. The Walnut study is especially remarkable. The restorers of the study discovered under the plafond painted in 1717-1719 by F. Pilmann a fresco dated back to the first quarter of the 18th century. It depicts Peter I as a victorious warrior. When Alexander Menshikov and his family were exiled to Siberia, his magnificent palace was adjusted for the needs of the First Cadet Corps. Most of the interiors were changed. In the second half of the 20th century the palace was restored to its original look. The Menshikov Palace was opened to the public in 1981. Nowadays the palace houses part of the State Hermitage collection dedicated to Russian culture.

The SPBVERGAZ is a small cozy hotel situated in the center of Saint Petersburg, on Vasilievsky Island. Not far from