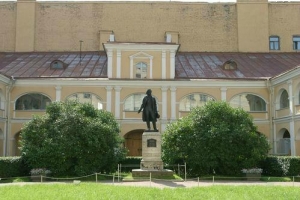 The flat on Moika Embankment is the last place where the outstanding Russian poet Alexander Pushkin lived. He accommodated there with his family from October, 1836 till January 29, 1837. It was the flat Pushkin left for his fatal duel with Dantes. In the study of the flat Pushkin died on January 29 (February 10, New Style), 1837 at 14.45 Moscow time. The building on Moika Embankment, 12 was constructed in 1720s and reconstructed at the end of the 18th-the beginning of the 19th century. Since 1806 it belonged to the Volkonskies, Alexander Pushkin was a friend of. The flat where Pushkin and his family lived was in the dress circle of the mansion. It was here, in the study that the poet finished his «Capitan's Daughter», worked on the «Peter the Great Chronicles» and wrote his last poem. In the study of the memorial flat the visitors can see the collection of over 4,000 volumes in different languages, Pushkin's desk and the armchair, as well as the poet's personal belongings, such as the ink, the pen, the waistcoat Pushkin was wearing on the day of the duel. The exposition of the museum features Pushkin's death mask and the medallion with a curl of his hair. The flat is decorated with portraits of Pushkin, his friends and relatives. In the flat one can see furniture, tableware and accessories typical for the poet's epoch. Some of them belonged to Pushkin's family. Tsarist government didn't favor the poet during his life and after his death strove to consign to oblivion all the facts connected with him. That's why the museum on Moika Embankment appeared only in 1925 under the Soviets. Naturally the apartment had changed a lot for the century that had passed since the time Pushkin lived there. In 1987 after the painstaking reconstruction work based on the rough plan drafted by Zhukovsky after Pushkin's death and the memorials of poet's contemporaries, the original look of the flat was reconstructed. The masters even managed to restore a part of the gala staircase. In 1950 in the yard of the mansion located on Moika Embankment, 12 the monument to Alexander Pushkin sculptured by N. Didikin was established. The mansion also features a memorial plaque reminding that it was the place where one of the greatest poets in the world history lived and died. The tradition of literary and musical evenings held in Pushkin's flat has been maintained for many years. February 10 is a special memorial day for the museum. Annually on this day one minute silence honors the memory of the great Russian poet. Nowadays the Pushkin Memorial Museum is the only one of this kind in Saint Petersburg. Literary and historical exhibitions held in the museum chart poet's life and work, tell about the tragic duel and the last days of his life and picture the broad panorama of Pushkin's epoch — the beginning of the 19th century.