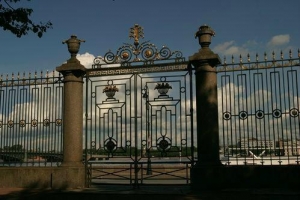 The ensemble of the Summer Garden is one of the oldest in Saint Petersburg. It was created by order of Peter the Great who designed the layout of the garden and chose the site. In 1704 the construction of the park was started: the territory was planted with different flowers and trees, the first marble sculptures which had been delivered to young Saint Petersburg from Europe were set. The Summer Garden was laid out as a regular garden with a geometrical pattern of crossing alleys, trimmed shrubs, and symmetrically arranged statues and fountains. Famous architects, such as Matveev, Zemzov, Miketti, Leblon and others took part in the creation of this masterpiece of garden art. Under Peter the Great the Summer Garden was a gala royal residence. In the summer time royal receptions and celebrations were held right in the Summer Garden's alleys, as the Summer Palace, designed by architect Tresini for Peter I, was too small for grand-scale entertainments the Emperor was fond of. To amuse Peter the Great and his courtiers temporary grottos, pavilions and even a maze were constructed. The Summer Garden has suffered from the floods more than once. One of the most destructive ones happened in 1777. Then many of the trees were pulled out, the system of fountains and the maze were ruined, statues were damaged. A short time later the Summer Garden was reconstructed — it was adjusted to the taste of the day but the original layout was preserved. The unique statues created by the 17th-18th centuries Italian masters were also restored. And although not all of the statutes of the Summer Garden have preserved till nowadays (in the middle of the 18th century there were about 200 statues and only 89 of them have survived until nowadays), the Summer Garden justly prides itself with the oldest in Russia collection of park sculpture. The most famous of sculptures is the so-called nymph of the Summer Garden — the statue of Flora, made of white marble by an unknown Italian sculptor at the beginning of the 18th century.  In 1773-1786 architect Velten created the famous railing that decorates the Summer Garden from the side of the Neva River. The masterpiece of decorative art, the railing strikes with the blameless harmony of proportions, elegance and noble simplicity. Nowadays on the railing of the Summer Garden one can see a memorial plaque set on the place where in 1886 revolutionist D. Karakozov tried to shoot Emperor Alexander II. In the 19th century new pavilions — Coffee house designed by Rossi, and the Tea house designed by Charleman — appeared. In 1855 in front of the Tea house the monument to famous Russian writer Ivan Krylov was placed. The author of the monument was sculptor Klodt. The pedestal of the monument is covered with the bas-relieves, depicting numerous characters of Krylov's fables. In the 19th century the Summer Garden was one of the favorite and prestigious walking places in Saint Petersburg. Many writers, poets and artists were fond of strolling along the alleys of the Summer Garden. There one could come across poet Alexander Pushkin, writers Krylov and Goncharov, composer Tchaikovsky, poet Block and other prominent figures of Russian culture. Common people were either not allowed in the garden, or limited by strict cloth and behavior conditions. Nowadays the Summer Garden, one of the most picturesque and quiet places of Saint Petersburg, is open to everyone.

The Austrian Yard-2 is set in the historical center of St. Petersburg, inside a quite and picturesque courtyard. It