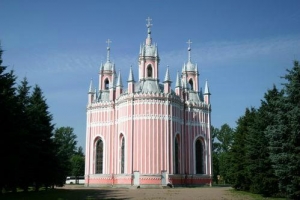 Nowadays the picturesque area to the south from Frunze Street, between Moscovsky Avenue and Yury Gagarin Avenue, is called Cesme, but at the beginning of the 18th century it was a foul swamp called «the frog bog» among Finns. According to the legend on this very place Empress Catherine the Great got the long-awaited news that on the 26th of July 1777 the Russian squadron gloriously defeated the Turkish navy in Cesme Gulf. This victory became a crucial point in the Russian-Turkish war of 1768-1774. To honor the memorable event the Empress ordered to build a palace on that very place where she met a messenger. The construction of the palace was entrusted to architect Velten. At that time English Gothic reigned in European architecture and that's why the architect took the Longford Castle as a model. Some years later close to the palace the church was erected. The church, also accomplished in Gothic style, was decorated with narrow vertical rods and plastic lancet arches, intersected with high lancet windows. The walls were topped with a parapet and pinnacle turrets. Nowadays the Cesme Church is one of the few buildings in St Petersburg that have Gothic motifs in their design. On the 24th of June, 1780 the church was consecrated to commemorate the glorious Cesme victory. Since then the palace and the church have been called Cesme. During the World War II the church was damaged seriously. The reconstruction works were carried out only in the 1970s. Since 1977 the church functioned as a branch of the Central Naval Museum. The exposition was devoted to the Cesme Victory. In 1991 after the long break the divine services were renewed in the Cesme Church, which is a functioning temple today. On the territory of the church there is a small cemetery. Originally there veterans of different Russian wars who had spent the downhill of life in the charity house of the Cesme Palace were buried. In the middle of the 20th century all burial places were destroyed. Nowadays there lie the soldiers who died defending Leningrad during the World War II.

The Accent is a budget mini-hotel located in the Moskovsky District of Saint Petersburg, in a quiet green courtyard.