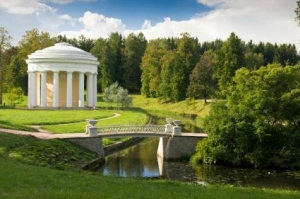 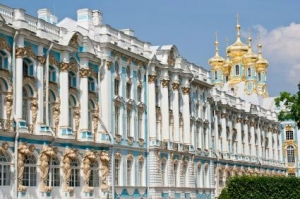 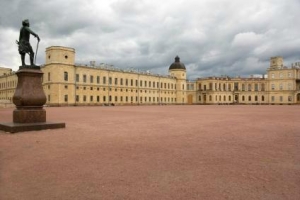 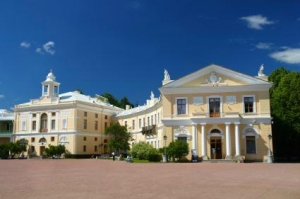 The history of Pavlovsk as the splendid palace and park ensemble dates back to the 12th of December 1777 when Catherine the Great gifted a small land, 6 km from Tsarskoye Selo, to her son Paul and his wife Maria Fyodorovna on the occasion of the birth of their first son, the future Emperor Alexander I. The new estate was named Pavlovskoye Village, but shortly after the construction of the palace and park ensemble began under supervision of prominent architects the beautiful estate could hardly be called a village. In 1779 in Pavlovkoye two small wooden palaces, one in honor of Paul, another in honor of Maria, were built. In 1780 the construction works acquired larger scale as the favorite architect of Catherine the Great, Charles Cameron, was invited to design the ensemble. The foundation stone of the Great Palace was laid on the 25 of May 1782 and already by 1786 the new palace, a marvelous example of Russian Classicism, was erected. Along with the construction of the palace the landscape park that was designed as an imitation of living nature was laid down. The exceptionally beautiful natural surroundings suggested the architectural solutions and talented architects masterfully combined the natural landscape with the architectural construction created by a man. The park appeared to be diverse staying the whole ensemble. The landscape park of Pavlovsk is one of the largest in Europe — it stretches on the impressive territory of 600 hectares. In 1788 Paul I who preferred Gatchina as a royal residence gifted Pavlovskoye to his wife Maria Fyodorovna. On the 12th of November 1796 a week after he ascended the throne the new Emperor issued an order to rename the Pavlovskoye village the town Pavlovsk.  After the tragic death of Paul I Pavlovsk was given over to Maria Fyodorovna who loved this residence very much and did a lot to make Pavlovsk's palace and park even more beautiful. Soon after the Revolution of 1918 the palace and the park of Pavlovsk were declared a museum complex. In the same year the town changed its name — it was called Slutzk in honor of the deceased revolutionist Vera Slutzkaya. In January 1944 after the liberation from the Natzist the town was returned its historic name. During World War II Pavlovsk suffered great damages — the palace was plundered, several pavilions were destroyed and the parks were deprived of many precious trees. Although as compared with other former imperial residences lying in ruins the ensemble of Pavlovsk wasn't so terribly damaged. Owning to the efforts of restorers and artists the palace and park ensemble of Pavlovsk has been totally recreated and now fascinates with its classic strict and harmonious beauty as ever. Nowadays the Palace of Pavlovsk houses the permanent exhibition of Russian portrait. The visitors are welcome to walk through the chambers of Empress Maria Fyodorovna, admire the original interiors and belongings of Russian tsars, created for them by the best artists of that time.