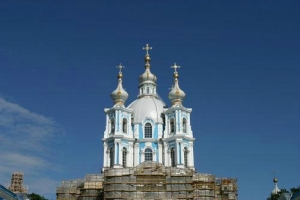 One of the best Baroque architectural ensembles of Saint Petersburg the Smolny Cathedral is situated on the bank of the River Neva on that very place where under Peter the Great there was a tar yard (Smolyanoy Dvor, as «Smolny» is Russian for tar) that supplied the Admiralty with resin for the shipbuilding. After few years the tar yard was abolished but the place-name stayed. Close to this picturesque territory on the Neva bank in the 18th century a small Smolny Palace was erected. There some years the daughter of Peter the Great, Elisabeth, spent. She succeeded to a throne in 1741 and according to the legends dreamt of retiring from the world and taking the veil. But she didn't want to leave Saint Petersburg that was the beloved creation of her father, and ordered to erase a convent on the place of the former tar yard. Architect Rastrelli was entrusted to make a design and direct the construction works that were started in 1749. The dazzling blue and white Baroque-style cathedral became the center of the ensemble. The architect combined elements of Russian and European architecture perfectly and harmonically. Situated in the center of the inner yard the 93,7 meters high cathedral creates the impression of lightness, dynamics and plasticity. The rich decor of the facades, abundant use of the gilt, splendid combination of blue walls and white modeling make the cathedral look festive and solemn. The cathedral is surrounded with four blue and white churches that form a cross. Rastrelli died in 1771 and didn't see the ensemble complete. The construction works were stopped at the end of the 18th century and renewed only in the 1830s when architect Stasov started cathedral interior decoration. The spacious hall was marbled, three splendid iconstands were placed, facetted crystal balustrade was constructed in front of the altar and the beautiful rostrum was decorated with the most refined wooden carving. Among the treasures of the cathedral that have preserved till nowadays one should mention icons by A. Venetsianov — Christ's Resurrection and Presentation of the Blessed Virgin. Architect Stasov made the sketches for the cathedral railing, which ranges among the most beautiful railings of Saint Petersburg — the railings of the Summer Garden and the Cathedral of Our Lady of Kazan. Unfortunately, the original design of Rastrelli was not fulfilled completely. According to the architect's project, the ensemble was to be decorated with many-tier belfry 140 meters high. The belfry was intended to be the tallest in Russia and excel even the famous Ivan the Great Bell-Tower in Moscow. But Rastrelli's followers didn't build it as they considered that it would disturb the harmonious cityscape. The Smolny Cathedral is the record breaker of the construction terms, as the building has the longest story of erection in the city. The construction works were started in 1748, and the interior decorations were finished only in 1835. Thus, it took 87 years to build the cathedral. The Smolny Cathedral was consecrated in 1835 as the cathedral of all the Russian education schools for the sake of Christ's Resurrection. The revolution of 1917 became an important milestone in the history of the cathedral. The cathedral was plundered and the rich inner decorations were irreparably damaged. For quite a long period the Smolny Cathedral was blasphemously used as a storehouse. Today Smolny Cathedral is used primarily as a concert hall and the surrounding convent houses various offices and government institutions.

The five-star Grand Hotel Emerald is situated in the cultural, historical and business center of Saint Petersburg,

The Okhtinskaya Hotel is one of the best three-star hotels in Saint Petersburg. The hotel is stunningly situated on

The Austrian Yard Hotel is situated in the historical district of the city, close to the Tavrichesky Garden and

The Marshal Hotel is situated in the historical district of Saint Petersburg, just 500 meters from the Tavrichesky

Hotel Vera is ideally located in the center of the city, within walking distance to Nevsky prospect and Moskovsky