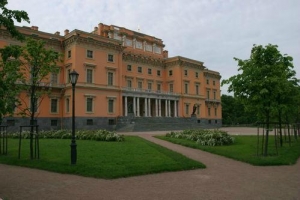 The Mikhailovsky Castle was constructed in 1797-1801 by order of Paul I. Afraid of intrigues and assassinations he didn't like the Winter Palace where he could never feel himself safe. His mother Catherine the Great overthrew her husband Peter III to gain access to the Russian Imperial throne and Paul I was afraid that he would suffer the same fate. The Mikhailovsky Castle was built to the south of the Summer Garden and replaced the small wooden palace of Empress Elizabeth Petrovna. Paul I strove to create an irreproachable shelter where he could hide from his numerous enemies and ill-wishers and make the castle as unassailable as possible. From four sides the castle was surrounded by waters of the Moika River, the Fontanka River and two canals, which were specially dug. To leave the palace and depart for the city, one should use the hanging bridges, which were raised in the nights. The new royal residence, that was isolated from the city and looked like a fortified medieval castle encompassed with a deep moat, stroke fear into the hearts of people. The Mikhailovsky Castle was designed by architects Vincenzo Brenna and Vasily Bajenov. The castle looks different from each side, as the architects used the motifs of various architectural styles — French Classicism, Italian Renaissance and even Gothic. In 1800 in front of the castle the gracious bronze monument to Peter the Great was established. By order of Paul I the inscription «From Great Grandson to Great Grandfather» was made on the pedestal that is decorated with bas-reliefs depicting scenes of two Russian victories over the Sweden during the Northern War. Emperor Paul I spent only 40 nights in the castle. On the night of the 12th of March 1801 he was murdered in his own bedroom by a group of officers. The plot was inspired by Paul's son Alexander. After the death of the Emperor the castle was abandoned as none of the members of the royal family dared to live in such an ominous house. In 1819 the castle was given over to the Main Engineering School that bestowed the castle second name — the Engineers' Castle. Among the most well-known graduates of the school one can remember the famous Russian writer Fyodor Dostoevsky. Nowadays the Mikhailovsky Castle is a branch of the Russian Museum and houses several permanent exhibitions: «Portrait Gallery of the Outstanding Figures of the 18 — 19th Centuries Russian History» and «Exposition of the 18th Century Sculptural Portrait». The core of gallery is formed by the official portraits of Russian monarchs starting with Peter the Great and ending with Nicolas II, as well as members of royal family and Russian generals. The portraits were made by outstanding Russian and foreign artists.

Mini-hotel PIO is located in the historical centre of St.-Petersburg, close to metro stations Mayakovskaya and