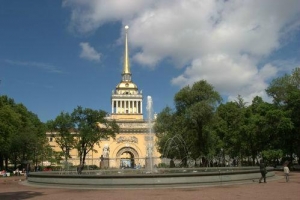 The Admiralty shipyards were founded by Peter the Great on the left bank of the Neva River in 1704. The project was worked out by Emperor himself and included dockyard, different workshops, ship armament and equipment storehouses. The first Admiralty building presented one-story clay-walled structures arranged in the form of the Russian letter "Ď". Some years after in the center of this building the stone construction of the Admiralty colleges crowned with a tower and a gilt spire was erected. In the 1730s the building was rebuilt in stone. Architect Korobov who was entrusted to conduct construction works didn't change the original layout and general outline except for the tower with the spire that grew considerably and became 72 meters high. At the beginning of the 19th century the Admiralty building again needed reconstruction as it clashed with the grand ensembles of the city center. The works were supervised by talented architect A. Zakharov. He designed a grandiose construction (its main facade is 407 meters long) consisting of two H-shaped buildings — the outer and the inner ones. The central part of the main building is topped with the tower having the weather-vane in the form of a ship on its top that has become the symbol of the city. The weather-vane, which we can see today, is the forth one, placed on the top of the Admiralty tower in 1886. It weights 65 kg and it's covered with 65 kg of pure gold, but still it turns around easily to indicate the wind direction. The Admiralty building was lavishly adorned with sculptures created by outstanding Russain artists Stepan Pimenov, Ivan Terebenev, Vasiliy Demut-Malinovskiy, Feodosiy Shchedrin and others. The 22-meters high-relief the Establishment of Fleet in Russia decorates the Admiralty tower. The relief represents Neptune who is handing Peter I the trident — the symbol of power over the sea. At the corners of the tower attic stand the statues of ancient heroes and commanders: Alexander the Great, Achilles, Ajax and Pyrrhus. The sculptural decoration of the Admiralty tower also includes the composition Nymphs carrying the globe. The statues above the upper colonnade of the tower symbolize the four seasons of the year, four elements of nature, and four main winds. Among them there are Isis, the patroness of shipbuilding, and Urania, the Muse of Astronomy.  The new Admiralty building amazed the contemporaries with its elegance, irreproachable proportions and the simplicity of architecture. Since then the Admiralty hasn't been rebuilt except for trifle alterations and has been preserved till nowadays. In 1874, in front of the Admiralty building the Alexandrovsky garden was laid out. In 1883, the garden was decorated with the busts of Russian writers and poets Nikolay Gogol, Vasiliy Jukovsky, Michael Lermontov, composer Michael Glinka and the Central Asia explorer Nikolas Prjevalsky. Originally the Admiralty was used for the shipbuilding and its premises served as workshops and different storehouses. In the 19th — beginning of the 20th century the buildings of the Admiralty were given over to administrative naval establishments. Since 1832 the Admiralty housed the Naval Architecture School that was later transformed into Saint Petersburg Naval Engineering Institute. Nowadays the Admiralty stays the architectural and compositional center of Saint Petersburg and one of the most beautiful samples of the early Russian Classicism.