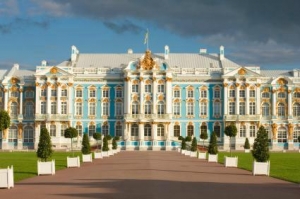 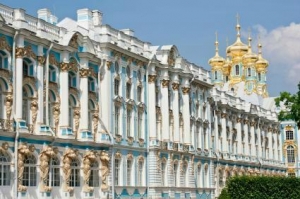 Pushkin, a small town and one of the most picturesque suburbs of Saint Petersburg is situated 24 km to the south from the Northern capital. Before the October Revolution it was the main summer residence of Russian emperors. Till 1918 the town was called Tsarskoye Selo (literary — «tsar's village»), then it was renamed Detskoye Selo («children's village»), and since 1937 it bears the name of great Russian poet Alexander Pushkin. When this territory was occupied by Sweden on the place that would become Tsarskoye Selo stood a small manor, the Saris hoff, Saaris Moisio («myza» or hillock), in Russian the Sarskaya Myza. Under Peter the Great the territory that was called Sarskaya Myza was presented to Peter's wife, Catherine and the first palace was erected. Thus the history of the superb palace and park ensemble began. For two centuries Tsarskoye Selo stayed the main summer residence of Russian emperors. Its construction was of state significance and the palace and park ensemble was regularly enriched with new edifices created by the best architects of that time. Tsarskoye Selo was especially loved by Elizaveta Petrovna. During her reign the Catherine Palace named in honor of her mother was rebuilt and extended. Thanks to the best architects of that time Zemtsov, Trezini, Rastrelli and others the modest building was turned into a splendid Baroque palace with rich decor of the facades and interiors. Catherine the Great also preferred Tsarskoye Selo to all other imperial residences. She commissioned the construction of the Alexandrovsky Palace and the number of annexes to the Great Palace — Agathic rooms, Cameron's gallery, Grand dukes building. The parks of the Tsarskoye Selo were enlarged and adorned with many new buildings and monuments honoring the friends of the Empress. Under Paul I who favored other residences like Gatchina and Pavlovsk the construction works in Tsarskoye Selo were suspended and were renewed on the larger scale under Alexander and Nicholas I. Thus in 1810 famous Imperial Lyceum was opened where small Alexander Pushkin studied. After the October revolution the palace and park ensemble was turned into a museum. During World War II the palace suffered great damages, but first of all the Second World War is associated with the mysterious disappearance of the Amber Room. During the occupation this priceless work of art was dismantled and taken out to Germany. Where it was brought and hidden nobody knows. In 1979 it was decided to reconstruct the Amber Room. It took about a quarter of a century to create new amber panels that would precisely depict the lost ones. The official ceremony of opening of the restored Amber room took place on May, 31, 2003, in honor of 300th anniversary of Saint Petersburg.