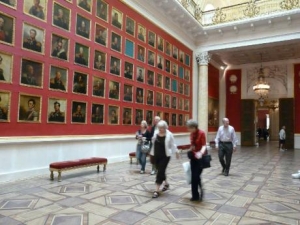 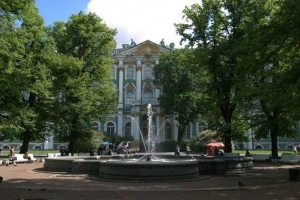 The State Hermitage Museum occupies five magnificent buildings along the Neva River Embankment in the very center of Saint Petersburg. They are the Winter Palace, the Small Hermitage, the Large Hermitage, the New Hermitage, and the Hermitage Theater. The part of the museum's exposition is displayed in the Palace of Alexander Menshikov and in the General Staff Building in the Palace Square. The Winter Palace, the official residence of Russian emperors, designed by architect B. Rastrelli in 1754-1762, occupies the leading place in the whole ensemble. The State Hermitage features one of the largest art collections in the world. It numbers about 3 million items, including masterpieces by outstanding artists. The Hermitage collection includes culture objects embracing the period from the Stone Age to modern times. The architect of the Winter Palace, Bartolomeo Rastrelli, confirmed that it was created «for Russian glory only». The palace became the symbol of the brilliant 18th century. It combines the power and energy of the baroque style with solemn grandeur of classic interiors, reminding of Russia's greatness.  The construction works of the Winter Palace were started in the reign of Empress Elizabeth, and proceeded during the short time of Peter III's ruling. In 1762 Catherine II became the Empress of Russia and the owner of the palace. It was her who started the Hermitage collection by purchasing in 1764 the first collection of paintings that used to belong to Prussian merchant Gantsovsky. Collecting works of arts became very important for Catherine the Great. Such art experts as Diderot, Voltaire and other connoisseurs of European painting helped Catherine to acquire the best works for her collection. A very narrow circle of people could admire the paintings kept by the Empress in her palace. Catherine the Great called it the Hermitage, the French word that means «hermit's dwelling». Life of Russian Royal family was closely connected to the Hermitage. New masters decorated the interiors according to their tastes and wishes, acquired new works of art, and enlarged the collection started by Catherine the Great. After the Great Russian Socialist Revolution of 1917 the Hermitage was turned into museum, and its treasures were open to the general public. The halls of the first storey of the New Hermitage contain the works by Antique sculptors, as well as collections of Greek and Etruscan vases. One of the richest museum departments is dedicated to Italian art. Renaissance masterpieces are displayed in the halls of the Large Hermitage. The gems of the collection include Madonna Litta and Madonna Benois by Leonardo da Vinci. In the Hermitage, one can admire works by Raphael, Titian, Giorgione, and Michelangelo. In the Spanish halls one can see the paintings by Velasquez, Murillo, El Greco. Dutch and Flanders art is represented in canvases by Rembrandt, Rubens, Van Dyck, and Snyders. The Hermitage boasts a great collection of French paintings, including works by Fragonard, Greuze, Chardin. The museum also possesses a valuable collection of impressionists and postimpressionists: Renoir, Picasso, Van Gogh and others. The Hermitage collections include objects of primitive culture. Some of the exhibits are kept in the Hermitage's Golden Storeroom. Among the items are splendid works by Scythian jewelers that were found during the Black Sea Coast burial mounds excavations.